Due to recent storm flooding events, the Village of Skokie has created a stormwater taskforce that consists of Skokie staff, residents, and stormwater engineer consultants.  The group will examine existing stormwater infrastructure as well as Village ordinances and policies to identify potential action items to improve its stormwater management.  In order to get more information regarding the location and severity of flooding, we are asking that all Skokie residents, businesses, or other property owners fill out a questionnaire.  This is a new, more detailed questionnaire, so please fill it out even if you have reported flooding to the Village for past storms.

Please be an advocate and tell your neighbors.

Take the questionnaire here.  Be sure to save and email your questionnaire to tburke@cbbel.com or print and mail it to:
Thomas Burke c/o Christopher B. Burke Engineering, Ltd.
9575 W Higgins Rd Suite 600
Rosemont, IL 60018

Or submit the questionnaire online, here.

Skokie, known as Niles Center until 1940, was originally a small farm community. The Skokie sewer system was constructed in the 1920's and was designed to carry both sanitary flows and storm water runoff to the water treatment plant with overflows to the North Shore Channel during heavy rainstorms.

The system was more than adequate for a small rural community; however, modern Skokie, developed by the post-war housing boom and the construction of the first interstate highway out of Chicago, altered the above-ground landscape and created a storm water runoff control problem. After a heavy rainstorm, Skokie's storm water receded too quickly and overwhelmed the sewer system. This created back up of combined sewage in basements throughout the Village, presenting both a health hazard and threats of property damage.

A Storm Water Relief Task Force was organized in the early 1980's. Their challenge was to find a system to control storm water runoff. The task force's research showed that a traditional solution to storm water runoff problems included separating storm and sanitary sewers or the installation of large sewers to carry storm water away from the Village to a reservoir, tunnel, or lake.

Unfortunately, the cost of implementing these solutions in Skokie would have exceeded $160 million (1980 dollars). At that time Skokie's annual budget was about $30 million. Disappointed but determined to find a solution, the Village Board hired an engineering consulting firm to develop a more workable and affordable solution.

After research and analysis, the Village and its engineering consulting firm determined that the most effective program consisted of a four-phase engineering process that would eventually lead to the reduction of sewer system overload and water surcharge into homes and businesses. The phases of the project involved an engineering review of all building and sewer elevations, sewer capacity, street-ponding and alternative storm water detention areas. The resulting program was a highly engineered storm water runoff system that complements the natural flow of water (through the laws of gravity) by altering street elevations and adding water detention areas where necessary. 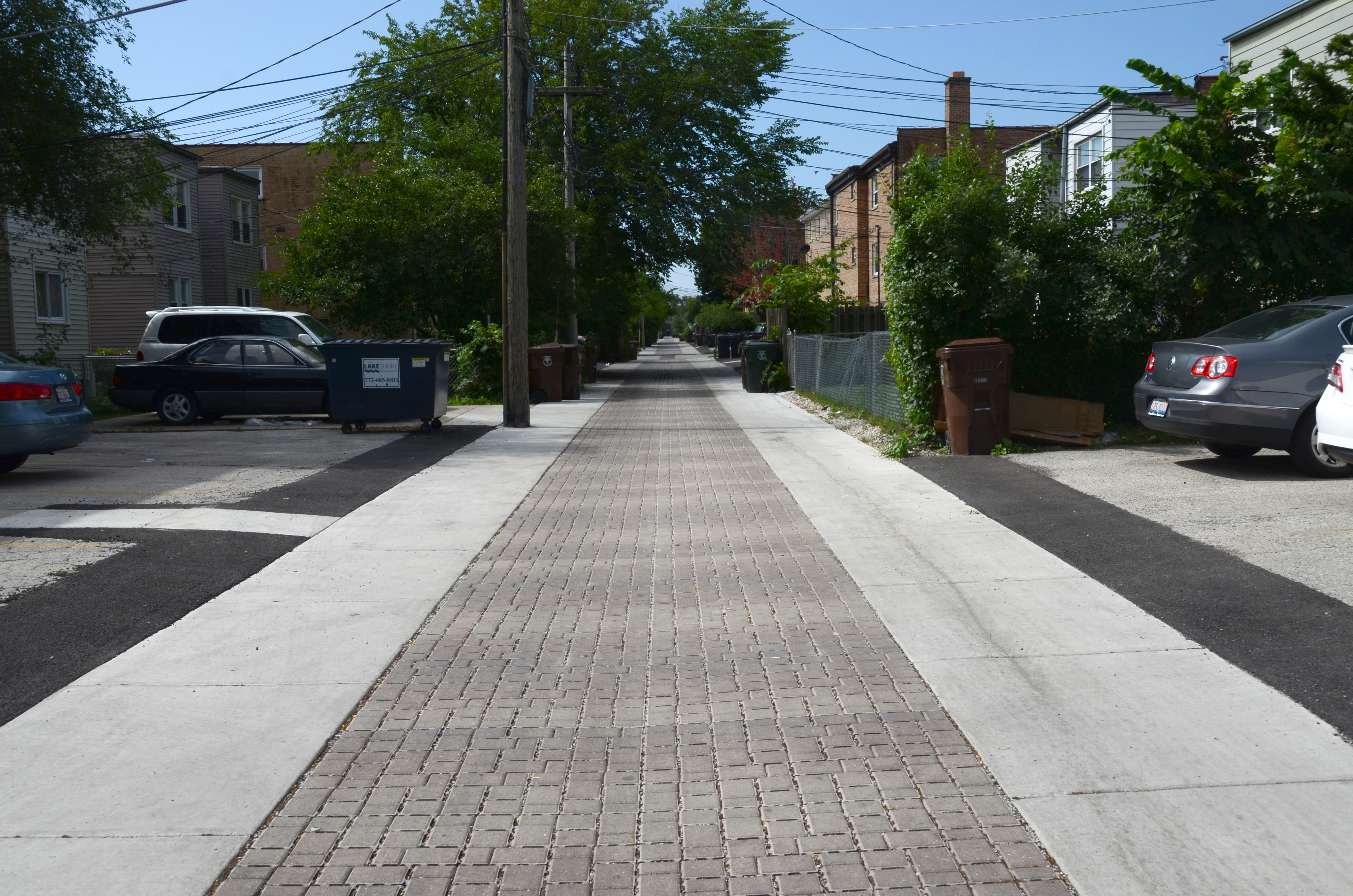 The Village also adopted four ordinances specifically designed to control storm water runoff. The first ordinance required all redevelopment projects (Old Orchard, Village Crossing, etc.) to contain storm water in a manner that will not adversely impact surrounding properties. The second ordinance required the disconnection of all downspouts from household sewer lines. The Village determined that approximately 30% of the rain in the Village falls on roof tops. When downspouts are disconnected from the house drains, this high volume of water is released onto grassy areas and parkways and diverted from the sewer system. The third ordinance requires overhead sewers in all new residential construction. Finally, in 2001, the Village Board adopted an ordinance which requires an engineering drainage plan for all new residences as well as large additions to existing residences.

The Village of Skokie operates as a combined sewer system. A combined sewer system collects stormwater runoff, domestic sewage, and industrial wastewater into one pipe. That flow is then conveyed from the Village’s collector sewers to large interceptor sewers that are owned and operated by the Metropolitan Water Reclamation District of Greater Chicago (MWRD). These interceptor sewers transport the wastewater to the MRWD’s O’Brien Treatment Plant, located at the corner of Howard Street and McCormick Boulevard, for treatment. Treated water is then discharged into the North Shore Channel, which runs along the east side of McCormick Boulevard. The Channel is part of the larger Chicago Area Waterway System, a man-made drainage system which dates to the reversal of the flow of the Chicago River. This System is also operated by the MWRD.

During storm events, stormwater causes the volume of wastewater to greatly increase, which can sometimes overwhelm the capacity of the system. The Village’s system is designed to accommodate up to 2.1” of rainfall in an hour. However, Village sewers operate in conjunction with the MWRD system. If the MWRD’s interceptor sewers are at or over capacity, the system can begin to backup. In this situation, the sewerage will bypass the treatment process and will overflow into the Deep Tunnel. The Deep Tunnel is a very large, many miles long tunnel that runs under Skokie, between McCormick Boulevard and the North Shore Channel, and provides a mechanism for wastewater to be collected and then transported from Skokie to the McCook Reservoir, located in south suburban McCook. The wastewater can be held there, and then treated after the storm event is over. However, if the Deep Tunnel is already at capacity, the sewerage will divert directly into the North Shore Channel. Depending on volumes of rainfall and the duration of the storm event, this will cause the water level in the North Shore Channel to rise. If the water level in the Channel exceeds the level of Lake Michigan, and if the level in the Channel is such that overbank flooding may occur, then the MWRD may open the flood gates at the Wilmette Pumping Station and allow the untreated wastewater in the Channel to release directly into Lake Michigan. The water levels in Lake Michigan fluctuate seasonally and yearly. When the Lake is at a high level (it is currently approaching record high levels), the District has less flexibility to divert water from the North Shore Channel. All these complex factors influence how well the system performs in any given rainfall event. If two significant storm events happen in a very short period of days, it is likely that the system capacity may not be fully available for the second storm event.

For further information on how the District manages the Chicago Area Waterway System or on the design and construction of the Deep Tunnel as part of the Tunnel and Reservoir Plan (TARP), please see the links immediately below.

Water Management in Anticipation of Storms
Have you ever wondered how MWRD determines when to open the locks to Lake Michigan during a storm?  Check out an overview of the Chicago Area Waterway System (CAWS).

The Tunnel and Reservoir Plan (TARP)
MWRD has a "Deep Tunnel" network of underground tunnels and reservoirs designed to reduce flooding.  Skokie is part of the McCook Reservoir.  A second phase of construction is scheduled to be completed in 2029.

Be a Green Neighbor
There are many things that homeowners can do to help manage stormwater.