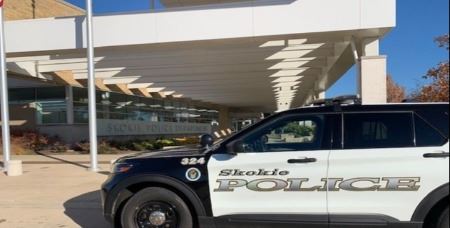 The Patrol Division is the largest component of the agency and is responsible for responding to both emergency and non-emergency calls for services from the public. In addition, this Division handles traffic enforcement, special assignments, self-initiated activities and addresses community concerns. Patrol Officers are responsible for partnering with the community to protect life and property and to maintain peace, order and safety and perform ancillary functions such as Evidence Technician, Field Training Officer, Canine Officer, Special Enforcement Team Officer and Bicycle Patrol Officer, to name a few.

The Patrol Division is divided into three shifts in order to provide 24-hour police services. Each shift or "watch" is supervised by a Commander and several Sergeants. The number of Officers assigned to each shift is tailored to historical and anticipated activity levels.

In early April 2022, the Skokie Police Department invited children to enter a contest to name the Department's new K9. The contest announcement encouraged names connected to the Star Wars franchise, as the new K9's handler, Officer Rob Ochoa, is a big Star Wars fan. The new K9 would replace recently-retired Jasko, who retired in fall 2021 after seven years of service (see more information below).

Over 100 entries were received from Skokie children, and the winning name, Jinn, was proposed by Jessica Fong, a freshman at Niles North High School. Congrats, Jessica!

Jinn, a black German Shepherd completed extensive training, both individually and with Officer Ochoa, and was officially sworn in at the August 1, 2022 Village Board meeting. Since June 2022, Jinn has been living with and working on street patrol with Officer Ochoa.

Click here to see a video of Jinn's swearing-in ceremony (starts at approximately the 7:15 mark on the video).

In late September 2021, Jasko, the Skokie Police Department’s dog in the Canine Unit, ‘retired’ after seven years of service to the Village. Based on the Department’s K9 Module, Jasko and Officer Nick Larson, Jasko’s handler, conducted 575 outside training exercises, 630 on-duty employments and over 100 off-duty calls. Jasko’s work consisted of narcotics searches, open-area searches for firearms or other evidence, searches for endangered missing persons, violent crime suspect tracking and apprehensions and more. During his years of service to the Village, Jasko assisted several federal law enforcement agencies, including the Federal Bureau of Investigation and Bureau of Alcohol, Firearms and Tobacco, as well as the Cook County Sheriff’s Police and nearly 20 suburban police departments.

In addition, Officer Larson and Jasko conducted dozens of community engagements such as demonstrations for student groups, scout troops, Citizen Police Academies and more. During his retirement years, Jasko  with Officer Larson and his family, as he did during his years of service.

The Department Social Worker is responsible for crisis intervention, assessment, short-term counseling, court advocacy and referral of victims and witnesses to appropriate services. The Social Worker assists other Department members in handling particular cases, provide critical incident stress debriefings and performs recruit and in-service training to employees as necessary. The Police Social Worker may be contacted at 847-982-5943.

Evidence Technicians trained in crime and accident scene processing are assigned to each of the three watches to ensure 24-hour per day coverage. Annually, nearly 800 follow-up investigations are conducted.

The Skokie Police Department has both a Hostage Negotiation Team and a special purpose Tactical Intervention Team in order to better serve and protect the citizens of Skokie. The teams are activated only in the event of extraordinary incidents such as a hostage or barricaded subject, terrorist situations, civil unrest, to execute high-risk warrants or when VIP protection is deemed necessary.

In direct response to recurring criminal concerns and specific crime patterns, the Skokie Police Department maintains a Special Enforcement Team to more effectively control and suppress criminal activities and trends as they are identified. The team consists of a Sergeant and four Police Officers which operate in uniform or plain clothes as necessary to meet their objectives. The team often coordinates its efforts internally with the Patrol and Investigative Divisions and externally with agencies such as the Drug Enforcement Administration (DEA), U.S. Customs and the Federal Bureau of Investigations (FBI).