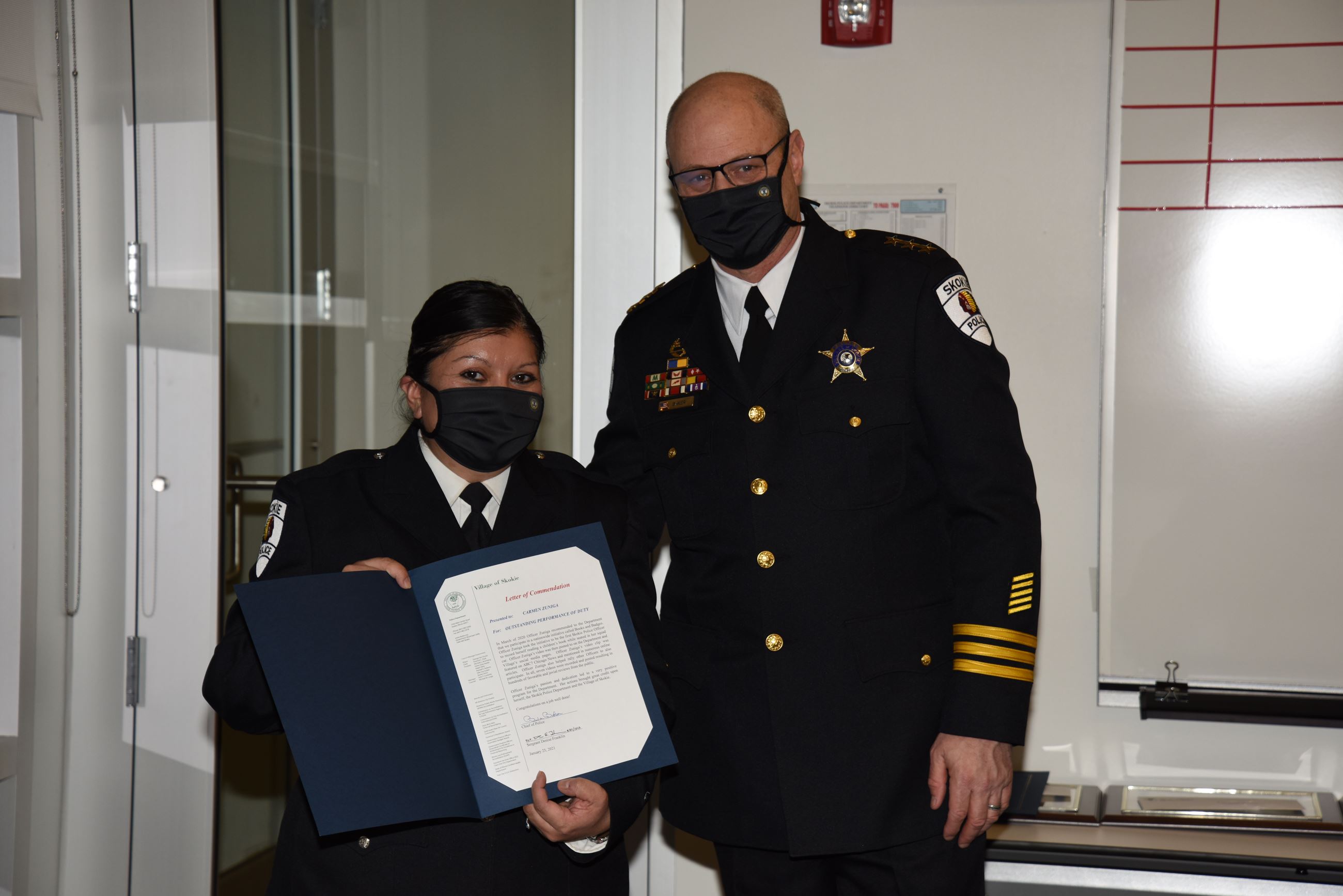 annual Awards Ceremony that recognizes personnel who have distinguished themselves and the Skokie Police Department by their exemplary acts of bravery, professionalism and praiseworthy deeds.  The Awards Ceremony featured the presentation of the following awards: Lifesaving  Commendation, Letter of Commendation, Special Service Commendation and Department of Defense Patriotic Employer Award.

The award recipients are as follows:

Lifesaving Commendation Recipients:
Officer Nicholas Larson
Officer Michael Okon
Communications Operator Briana Torres
An award presented to an individual who demonstrates exceptional performance or care in an effort to rescue or to save human lives, which without such intervention would likely have resulted in death or subsequent death despite such exceptional efforts.

Letter of Commendation Recipients:
Officer Carmen Zuniga (pictured above)
Officer Eric Hadnott
Community Service Officer Ameer Khan
An award given to an individual for the performance of an act which brings credit upon the individual and the entire Department as a whole.

Special Service Commendation Recipients:
Tomasz Krozel
Jaroslaw Krecisz
An award is presented to an individual displaying leadership during an individual or cooperative effort to solve a specific problem, reduce crime, or the fear of crime within the community, and whose efforts are conducted in a manner bringing credit to the Department; Exemplifying administrative initiative and effort contributing to the overall achievement of Departmental goals and objectives, thereby enhancing and improving the delivery of police services; Exhibiting great professional skill and conduct as a member of a unit or group during a coordinated action or effort in executing a specific objective.

Department of Defense Patriotic Employer Award Recipient:
Commander Daniel O’Brien nominated by Community Service Officer Claudia Contreras (United States Army Reserve)
An award an employee serving in the National Guard or Reserve, or the spouse of a Guard or Reserve member, may nominate individual supervisors and bosses for support provided directly to the nominating Service member and his or her family. The Patriot Award reflects the efforts made to support citizen warriors through a wide-range of measures including flexible schedules, time off prior to and after deployment, caring for families and granting leaves of absence if needed.